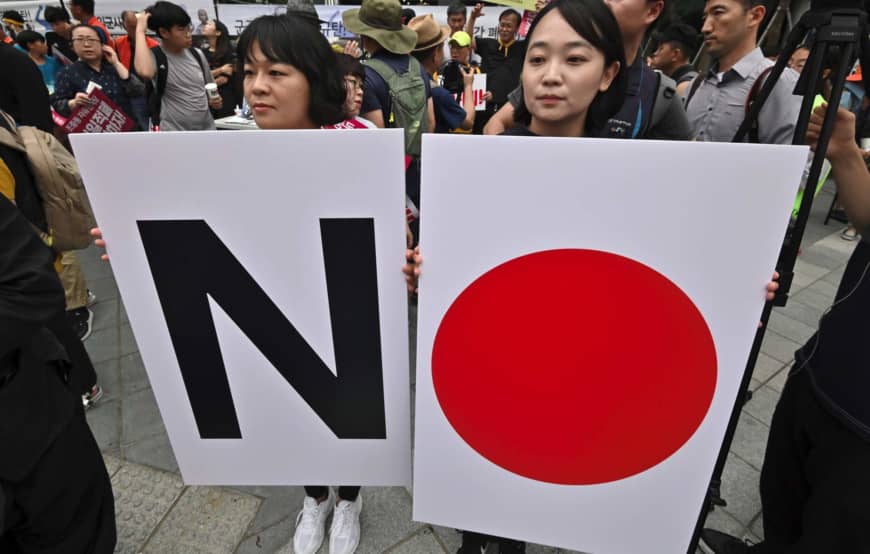 A trade spat between Japan and South Korea shows every sign of worsening as Seoul plans to report Tokyo over export controls at a World Trade Organization meeting.

Tokyo said Tuesday there is no embargo, and the only wrongdoing is on the South Korean side.

Japan is the world’s leading producer of the compounds — fluorinated polyimide, hydrogen fluoride and a group of chemicals known as resists. Japan argues some materials have been inappropriately handled.

Fearing damage to its supply chains and economy, South Korea plans to report Japan on Tuesday and Wednesday to a meeting of the WTO general council. It also is considering suing Japan at the WTO dispute settlement body for alleged unfair trading practices.

Figures released Monday by the Korea Customs Service showed a sharp drop in South Korean exports of 14 percent in the first 20 days of this month from a year earlier. In particular, sales of semiconductors fell by 30 percent, while imports from Japan fell 15 percent.

“We will continue to thoroughly explain our position to relevant countries, including at the general council meeting,” Seko said.

Seoul requested talks by Wednesday. Tokyo is likely to skip the opportunity.

On July 1, Japan gave three days’ notice of a tighter screening of exports of the chemicals. Moreover, it is planning to dump South Korea from a list of nations that receive preferential treatment.

South Korea is the only Asian nation on the list, from which Japan has never removed an entity. Japan contends that the measures are strictly about removing the preferable export status due to a “significant loss of trust.” South Korea alleges retaliation and a deliberate attempt to undermine its economy because of political and historical grievances.

Regarding the export controls, Japan is standing firm. It has offered to answer questions by email, but insists that the revocation of preferential treatment in export controls is a domestic decision that does not require bilateral consultation.

“This update is a normal part of the continuous revision of Japan’s export control system under relevant international agreements,” the trade ministry said in a statement. “It is not an embargo.”

In an effort to cool tensions, Seoul has reached out to Washington. President Donald Trump has offered to help but so far has not intervened directly.

Officials from both sides met on July 12 seeking to ease tensions. But the five-hour meeting not only led to no breakthrough, the two sides began trading barbs and accusing the other of misrepresenting the talks.

For one thing, they couldn’t even agree on how to describe the meeting. The Japanese side framed it as an “administrative briefing,” whereas South Koreans called it a “consultation” over scrapping the tightening of controls. Not least, Seoul is indignant over the characterization of its control over exports as inadequate. It says more than 110 people work on their implementation. Tokyo says the number is inflated, and that only 11 staff are dedicated for that purpose.

With Japan citing a loss of trust, it is unlikely the government will accept South Korea’s request for a new meeting anytime soon. Tokyo is adamant that the meeting was not a “consultation,” as such a term would classify the meeting as bilateral talks — part of the dispute settlement process at the WTO.

“The relationship of trust has been undermined further,” Seko said. “I think the first step to regain trust would be for South Korea to correct false statements and clarify remarks. In this area, Japan has nothing to do.”